Like Abraham Lincoln and most Supreme Court Justices before 1930, Linda does not have a law degree,  qualifying to take the state bar exam by a combination of work at Levy & Goldman and classes at Peoples College of Law.

Her classmates in those years include former LA Mayor Antonia Villalagosa, LA City Councilman Gilbert Cedillo and State Assemblywoman Maria Elena Durzazo.   Linda passed the 1981 first year bar exam with the only grade of “A” and the 1985 bar exam the first time, when the passage rate was less than 50%.

Linda is a credentialed community college teacher since 1988, an Adjunct Professor at Peoples College of Law, a licensed real estate broker since 1999, a Certified Mediator since 2001 and Court Appointed Counsel since 1996, representing conservatees in senior or limited conservatorship proceedings. She has represented conservators, both professionals and family members, since 1990, including in the mental health court.

Linda has acted as executor or trustee in more than 10 cases and is bondable for $10 million.  Her trial experience includes a five day bench trial that succeeded in winning title to a property whose recorded ownership was in the name of another for thirty years. The win was confirmed unanimously on appeal. [Estate of Olvera v. Beatriz Stotzer, B190105 (2nd Appellate District 2007)]

As in house counsel for the West Coast Office of the IATSE for two years, she is familiar with issues related to union and non-union movie and TV productions.  Her clients include members of the Los Angeles Philharmonic, the Musicians Union, SAG-AFTRA, DGA, UTLA, SEIU, LGBT, and LAPD and LAFD employees, and two religious communities. Her criminal law experience is limited to seniors cited for driving mishaps, the most recent a referral form Huntington Hospital’s Senior Care Network. Linda also gets referrals from Musicians Union Local 47 and is on the referral list provided by Huntington Library to their Heritage Society members.

Linda is able to act as Successor Trustee or Administrator of a probate estate with a multiple million dollar bond and professional liability insurance. Linda is qualified to act as a Mediator, Estate Administrator, Conservator of the Estate, Trustee and Evidence Code Expert on elder abuse, court required fiduciary accounts, conservatorship issues and the LMRDA [Labor Management Reporting and Disclosure Act]. 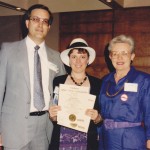 Californians for Conservatorship Re